Would a Ms. President Reagan Have Told it to Gorbachev Differently?

“Mr. Gorbachev, tear down this wall!” Who can forget this powerful and assertive declaration from President Ronald Reagan in his 1987 speech at the Berlin Wall? But how would we receive this demand if a woman said it during a business meeting?

In a recent article in The Washington Post, reporter Alexandra Petri translates famous quotes into language women often feel they have to use in meetings and other group settings: “I’m sorry, Mikhail, if I could? Didn’t mean to cut you off there. Can we agree that this wall maybe isn’t quite doing what it should be doing? Just looking at everything everyone’s been saying, it seems like we could consider removing it. Possibly. I don’t know, what does the room feel?”

Petri was responding to actor Jennifer Lawrence’s claim that when she spoke directly and bluntly to a male employee, he accused her of being offensive. But the challenge for women to find effective ways of communicating without being labeled “terrifyingly angry” is not restricted to a Hollywood star. Petri’s “Women in a Meeting” language is laughably, maddeningly wimpy and raises a larger question that is both interesting and important: Do women have a problem communicating in the workplace? 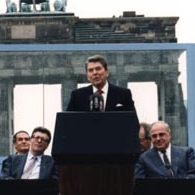 President Ronald Reagan delivering his 1987 speech in front of the Berlin Wall.

Cheryl Snapp Conner takes a look at wimpy language in her blog post for O.C. Tanner’s ‘a’ Magazine. She recommends that both women and men leave wimpy language behind—everything from inserting “just,” using filler words and Valley Speak too often, to vocal affectations such as uptalking and vocal fry.

Cheryl is exactly right. But the problem goes beyond wimpy language—it begins with some women’s tendency to be timid and too reluctant to say anything at all.

The researchers wrote in an article for The Washington Post, “We ran an experiment to examine what happens when men and women talk about important issues and make decisions as a group. We found that in groups where women were outnumbered and the group made decisions by majority rule, the outnumbered women spoke up less often and ultimately took up much less floor time—much less than even their minority status would have led us to predict. For example, in our lab setting, women who comprised only 20 percent of the group accounted for only 13 percent of the comments made, and this result was replicated in a sample of school boards where women were outnumbered on the board.”

Why aren’t women speaking up and why does it matter?

Girls and women start out ambitious and confident, but after being in enough situations where they are interrupted, ignored and denied affirmation, it becomes more difficult. Karpowitz and Mendelberg found that in majority-rule decision-making groups where men outnumbered women, women not only spoke up less often, they also experienced other negative signals. For example, men interrupted women to change the subject or otherwise express disagreement more often. Conversely, when women received more positive signals of affirmation and active listening from the others in the group, they spoke up more often. Though these patterns highlight the extent to which women are disempowered in group settings, Mendelberg commented that the experiments also carry a hopeful message:

“Recognizing this pattern is the first step toward empowerment. Women are not imagining that they are singled out—they may actually be subjected to harsher conversational treatment. Women who find themselves facing hostile speech behaviors can raise their authority in the situation by standing firm and retaining the floor when they speak. The findings can also serve as a reminder to men in these situations to examine their own behavior and not to give their male peers a pass. In this way all participants can set norms of respect and inclusion for all.”

Karpowitz’s and Mendelberg’s research also shows why it matters that women speak up—aside from the fact that they represent 50 percent of the population. “As women speak more, they don’t just say the same things that men do,” Karpowitz said. “They raise different considerations. As they participate more, they bring to bear a real concern for the poorest and neediest in a society.”

Establishing norms in which all members of the group feel supported in speaking up helps the group consider a wider set of ideas and perspectives.

So, ladies, let’s hear it! Share your ideas and do it confidently. Others may not agree with you, but it’s OK and important for them to hear and understand the perspective you bring. And both women and men can help to make their workgroups places where all voices are respected and affirmed.