This article appeared originally in O.C. Tanner’s A Magazine on July 20, 2015:

“We need a rights group for those of us who were born innately sarcastic, so our voice will be taken seriously.” – Local programming executive (who is also my son).

Yep. While the executive in question was speaking in jest, he’s right about the taken seriously part. While sarcasm is clever and sometimes even hilarious, it can also be a double-edged sword for the professional who’s ready to be taken seriously when it comes to completing a project or simply getting ahead. 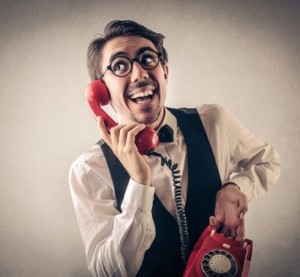 On the other hand, humor in business can be a remarkable gift. Not only does clever humor make a person come across as… well, clever, but studies have actually proven that the typical deadpan executive, the gifted person who can make someone who seems uptight start to snicker, are nearly always a professional win.

A Robert Half International survey, for example, found that 91% of executives believe a sense of humor is important for career advancement, while 84% feel that people with a good sense of humor do a better job.

Skilled use of humor gets a point across, lightens a mood, and in many respects is better than therapy for brightening the workplace and energizing all who may come your way.

Think about the “yes, and” strategy people learn to use in comedy improve: person one pops out a humorous remark, “I guess someone is trying to tell me they don’t want me to speak after all,” when the power to the microphone breaks. Person two then quips, “It must be your electrifying personality.”

The mood lightens instantly and the awkwardness of the gaffe goes away. (Or it just rattles around for awhile in the “bit bucket” as the techie programmer types like to say.)

In our own company, an executive known for being fussy about his office came back from a business trip to find his entire office set up backwards, and on another trip came home to find the office empty and another executive parked in lotus position on a yoga mat on the middle of the floor. “Didn’t Cheryl talk to you about this?”

Yet another benefit of wit is that bosses and managers who use self-deprecating humor are considered more approachable and human. (“I’m so forgetful I can hide my own Easter eggs.”)

But humor can also be dangerous, affecting an employee’s performance or future. For example, a public joke about the employee who messed up the travel arrangements or took his laundry along and paid $80 for hotel drycleaning. Rather than discussing the matter in private, a poor manager may air the grievance in public as a way of punishing the employee while also getting a laugh.

Or there’s the joke that goes a step too far into crassness or political incorrectness, or disrespects the company, the manager, or a member of the team.

There’s the clever IM messaging during a meeting mocking the boss or making fun of a client, or giving in to the sudden urge to tweet an acerbic note to your social media pals without directly naming the company or the boss. “Haven’t they heard about early outs around here? It’s Friday; I’m dying!” Or “Don’t you hate it when the boss asks you to do something he could have done faster himself?” At the least, a career-limiting move. At the worst, career-ending.

Clumsy Humor is a Risk

What about the joke that falls like a clunker, or turns funny for the worst of reasons? The joke about insurance actuaries that accidentally offends the insurance guys in the audience instead of making them laugh.

For anyone thinking to open a speech with a joke, this is a strategy best left to a professional comedian. Or perhaps is best left alone. Even a self-deprecating joke may fall flat if it offends someone in the audience, and expressions that were once considered innocent may now be considered politically incorrect.

In all, good use of humor in business is a gift and can help companies and teams to accomplish great work. But with any gift, the correct use of humor is a finely tuned instrument. Wise executives should learn to play it with skill.