This article originally appeared on my regular column at Forbes.com.

“Occasionally when you’re in that zone, striving to operate at your highest levels, you get consumed. You forget to eat and shower. But that can be a good thing. No one makes money eating or showering.” – Brandon Steiner, You Gotta Have Balls

I met Brandon Steiner a year and a half ago at the new Yankee Stadium, through an introduction from his friend and mine, Randy Garn. We weren’t there for a sporting event, but to join an executive training session for the Yankee Management staff. The stadium was beautiful and it was a remarkable experience for all. Recently we were connected by Garn again: “You’ve got to hear Brandon’s entrepreneurial story. You’re going to want to share his ideas with your readers,” he said. He was right.

Now I’m engrossed in Steiner’s most recent book, You Gotta Have Balls. I knew Steiner owned a marketing and memorabilia company, Steiner Sports Marketing, but I had no idea it’s extent. Steiner Sports Marketing is a $50 million organization with 100 employees. In addition to PR, marketing and speaker placement, it was Steiner and his organization who forged the Yankee/Steiner partnership that allowed him to buy the original Yankee Stadium and use the bleachers, the wood, the equipment and even the dirt to create sports memorabilia his organization could sell. (New York City made $11.5 million on the deal, which cost Steiner a total of two years negotiation and $16.5 million to create). 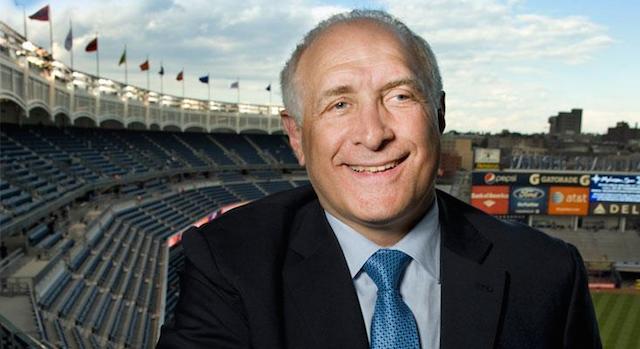 Brandon Steiner is the self-taught entrepreneur who created a $50M organization and partnered with the Yankees organization to purchase the original Yankee Stadium. (Image courtesy of Pace University)

Now a part of the Omnicom network of companies, the business is being groomed to reach $100M. Steiner speaks worldwide and has authored two books. At 55 years old he lives a life of success in Scarsdale, New York, with his wife Mara and three children, including a son and daughter now completing college and an African American/Native American foster son he and his wife have adopted, who is winner of the Bill Gates award and a junior in college. (Interestingly only one of his three children—his adopted son Inly Keith–has expressed the desire to pursue entrepreneurship thus far.)

Steiner began his life as a poor kid in Brooklyn. His father, who suffered from epilepsy, had left the family when Steiner was 5.  He grew up with two brothers in a tiny apartment raised by a mother who taught him life wisdom and scrappiness when she was able, but who was absent for much of his childhood due to bouts of ill health.

As a child, Steiner found an escape in attending and participating in sporting events. But when a fifth grade teacher presented him with money from his schoolmates to allow him buy some new clothes, his embarrassment spurred him into his first steps as an entrepreneur. He took on paper routes. He adopted marketing strategies he learned from watching his mother at work in her tiny salon, and her words would encourage him when he was feeling deterred by rejections. “What else could you do for them?” she would say. The mantra of “what else?” led to his first great business idea to expand his paper routes and revenue by delivering not just newspapers to his clientele, but providing them with fresh milk and bagels as well.

As Steiner grew, among his many entrepreneurial projects he set sales and management records for New York’s first Hard Rock Café and went on to create the nation’s first sports bar in Tribeca (projects that forged his relationships with many of the sports figures and celebrities who would become Steiner Marketing’s future clientele).

Steiner finds it hard to identify a beginning to his life as en entrepreneur, but his story is fascinating for anyone. For other entrepreneurs, however, Steiner epitomizes business zest and tenacity. The following are several of the strategies that have propelled his $50M firm to success:

In Steiner’s case, his memorabilia business took off in the mid 1990s when football great Walter Payton, after a deal Steiner had booked him for with Pfizer adamantly maintained he “wasn’t an autograph guy” but agreed to a single session for signing. Not knowing how far he could push his luck, Steiner lined up 1,500 items and brought them in a truck to Payton, who managed to sign them all in less than an hour. Then, while dying from a liver disease in 1999, Payton agreed to sign 20,000 more items that would be sold only after his death. That agreement and inventory put Steiner’s memorabilia success on the map.

The Yankees/Steiner partnership to purchase the original Yankee Stadium in an agreement to market its parts (including the dirt the games were played on) took two years of negotiations and involved the Major League Baseball organization as well as the city of New York. Getting the Yankee organization to agree was only the beginning of the biggest deal he’s closed yet in his life. While the Yankees owned the stadium building, the city of New York owns the property the stadium was housed on. The City drove a hard bargain to allow the components of the demolished structure to be carried away (and in many respects with good reason, as the structure overlays multiple subway lines and would have to be disassembled and removed with great care). Every aspect of the deal required multiple approvals within the Yankee organization, the MLB organization, and within city government.

In the end, the deal cost the Steiner/Yankee partnership a sum of $11.5 million in plus another $5 million in demolition and various fees.  After two years of the toughest negotiations Steiner has ever endured the announcement was issued by Mayor Bloomberg ’s office in 2004 [note – date of press release corrected to May 11, 2009] with a headline that summed the deal up for all:  “Sale brings $11.5M guaranteed revenue to the city and once-in-a-lifetime opportunity for fans.” Finally, the deal was done.

Another challenge Steiner faced was the 2004 World Series in which the Red Sox famously overturned the longstanding Yankees streak, initially delivering the newly formed business partnership a crushing blow. Who would want to buy Yankees memorabilia when the Red Sox had won the World Series? Ultimately, the outcome led to Steiner signing the Red Sox as well. In hindsight, Steiner recalls that many of his greatest lessons in business occurred during these pivotal years.

When Steiner Sports Markeing signed the Red Sox, all the players were amenable to good deals except one: Curt Schilling. In their rush to conclude an arrangement, Steiner’s team agreed to pay Schilling an exorbitant sum, with a large portion of the money due in advance. But Schilling didn’t turn out to be a marketing draw, and Steiner’s organization felt the pain of his deal for years. From that experience the team learned to slow down when necessary and proceed with greater diligence and caution. “Sometimes the best deals are the ones you don’t make,” he now says. His team has developed an internal slogan for deals not worth taking: “It’s a Schilling” (not worth the price; step away).

In the difficult economy of 2007-8, Steiner discovered that many sports enthusiasts were interested in “dirt products”: small bottles or capsules of dirt authenticated for their association with specific players or games. Grass from these locations is a big seller as well, and to date Steiner Sports has sold $1M worth of stadium grass (and many times that sum in stadium dirt).

What are your own greatest business strategies, and how do they compare with Steiner’s top secrets? I welcome your additions to the list he’s provided. To learn more about Steiner and his organization or to reach him directly, you can subscribe to Brandon’s 4-times weekly blog “What Else?” and obtain autographed copies of his book via his Facebook page or from his personal website at www.brandonsteiner.com.