Are You Doing The Wrong Things Right Or The Right Things Poorly? Here’s How To Tell

Editor’s Note: This post originally appeared on Forbes.com on October 14, 2014.

Those who follow Harvard Business professor Thomas J. Delong (author of Flying Without a Net) may recognize his terminology about doing “the right thing poorly.” (Delong wrote about the concept in Harvard Business Review here.)

But this week I learned how to apply the Performance Matrix to life as an entrepreneur from the individual who premiered the concept in his 1998 book, A Touch of Reality: fellow CEO Space instructor and business and management expert Bob (Robert) Johnson. Earlier this year Johnson spoke with me about collaboration for one of my previous posts. Today we examined the way entrepreneurs can use the Performance Matrix to hit their optimal marks. For a visual on this discussion, consider the quadrants below: 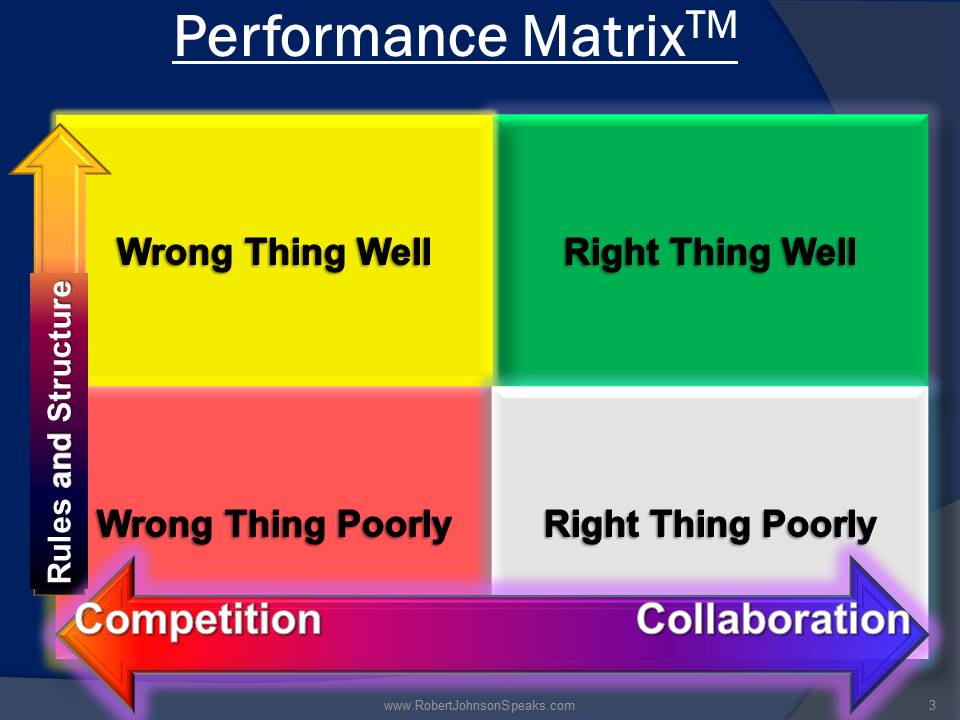 In the upper right quadrant of this matrix you might envision McDonald’s or Apple (companies that are generally currently perceived to be doing the right things well). Yes, we realize the opinion may depend on the season or day and are not universal, but by and large these companies are addressing their marketplace well.

But don’t forget, Johnson says, that every company currently doing the right thing well has risen out of the former experience of doing the right thing poorly. A new product design the company hasn’t gotten proficient at yet. Or a product module that isn’t quite 100%. Products fit there. Businesses, too. Even the internet itself is not yet sure what it is going to become.

So doing the right thing well is the end of the story, correct? Not at all, Johnson says. From this place, there are forces that push products and companies left. Changing demographics, technology, economic conditions force them into the quadrant of doing the wrong thing well.

“Consider the U.S. Post Office,” Johnson says. “Put a square of paper in the box, write on it wherever you need it to go in the world, and it’s done.”  But as FedEx and email emerge… the Post Office may be doing a job as well as it ever did, but the market forces are pushing it left.

“To be doing the wrong thing well, all you need to do is maintain the status quo,” Johnson said, in what I considered to be the most insightful remark of our chat. As organizations move left they complete the cycle every product and every company enters. With patience, innovation and practice they move into the “right thing poorly” again—perfect their approach, and hit their optimal stride until market forces push them leftward again.

“Every organization goes through the cycle, “ he says. “For a car, the cycle of a new design may last 4-7 years. For fashion, the cycle is likely 12 months. In the software business, however, as soon as you put up a new program there’s someone in a basement saying, ‘How do I hack that?’ The optimal market for software is sometimes as short as just 30 days.”

So what should entrepreneurs learn from this cycle? According to Johnson, identify the business you’re in and estimate its time cycle. If it’s a software program that takes five years to implement… well, you may have the right idea, but someone else may get to it first.

As to doing the wrong thing poorly, you can get to that quadrant from any square on the map. “You lose your focus and lose your vision, perhaps,” Johnson says. “When this occurs, your organization is like a heart in ‘defib’—it’s certainly busy, and you can see that it’s moving a lot. But it’s not really getting anything done.”

How do structure and collaboration factor in? On the bottom right, we have low structure and high collaboration, Johnson tells me. “Entrepreneurs thrive here. This is where children are playing, experiments happen, and good things begin to emerge.”

In the upper left, we see high structure and high competition. “Here’s where we see companies striving to measure success according to their own prior history. They are measuring themselves in ways that no longer apply. They are surviving.” Groups in the upper left that survive are the ones such as public education that have very little competition, he notes.

Why the focus on the Performance Matrix? “In real life, there’s no practice field for new business,” says Johnson. “For any high performance team, you’ll notice the team spends much more time practicing than performing. The same is true for ensemble musicians as well—they are able to explore their capabilities and they know their chances for success because they have practiced.”But in business? “We are forced to learn in real time (like the War Room in the Pentagon). We make decisions that are designed to magnify risk.”

Organizations with low structure and high competition are the most highly challenged of all. In government, we would call it “anarchy.” In a commercial organization, the company is simply trying to survive. Employees are working only at keeping their jobs.

In all, the Performance Matrix is an excellent model for determining where you currently stand as an organization and what you need to do next. By this model, where does your company stand? I look forward to hearing your thoughts. Readers who would like to reach Bob Johnson directly can find him at www.robertjohnsonspeaks.com.